I had heard that Monsterpalooza was a good place to vend, so I gave it a shot. I figured there was probably a good bit of horror and stage wear/post-apocalyptic crossover. Monsters could look pretty good in some of my stuff. And maybe a special effects company would like my stuff enough to hire me to create wardrobe for their projects.

This was my first time at Monsterpalooza. I had heard about it in passing from some of my prop maker / special effects friends. This was also my first time at the Pasadena Convention Center. The drop-off system was a little complicated. I had to drop off my stuff during an alotted half an hour spot, which is just enough time to unload, cart your stuff to the elevator, take it up to your spot, and then bring he cart back.

The show itself was nice and long. It commenced on Fridy evening, ran most of the day Saturday, and then finished up on sunday.  It was however, a little quiet out at the back side of the hall, farthest from the entrance. Being right across from one of the concession widows may have helped, but not a lot. Not too far from me, the owner of Shrine was selling his designs, as well as some Tripp NYC apparel.

The impression that many of the other vendors gave me is that this was their best show of the year. However, they also said, during and after this event, that the crowd seemed to have started to change. They noticed a lot more "Halloween" shoppers (people looking for mass-produced merchandise like posters, t-shirts and masks) and fewer of the type of shoppers that made it such a great show in the past. Namely, the latter shoppers were appreciative of the artisanal quality of one-off or small-run pieces made by the skilled and talented artists of the local Hollywood special effects and prop scene.

I had to wonder if I could have sold more if I had vended at an earlier year. My sales were OK, but I did not quite break even on all my expenses. I fortunately was able to sell a lot of the clothing that I had in stock. Also, I made an effort to get leads for the future. You see, I decided to also create some unique pieces just to show at Monsterpalooza. This was a brown dress, a pair of repurposed surplus pants, and a jacket that was later named the Fraktur Mark-II. I figured the jacket would be the mos popular, and I was right. I managed to produce many more the following month and got at least a couple sales from the Monsterpaolooza leads I had collected. So in the long run, I did break even, at least. 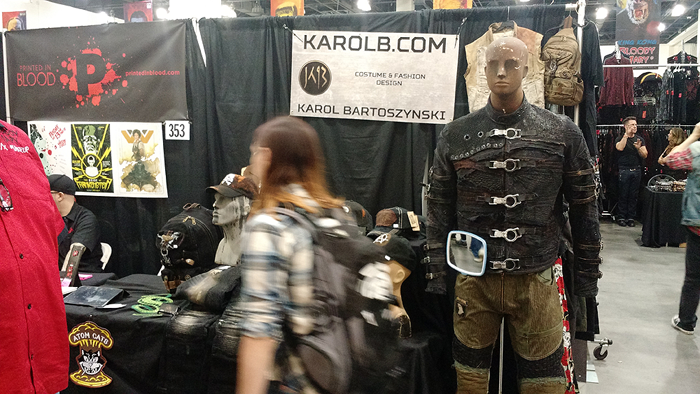 I took a look at what I sold and the kind of people attending, and tried to make some guesses at to what I would bring next time. I definitely needed more straight-up horror stuff; like flesh and blood and eyeballs sort of thing. Looking at the crowd, I definitely noticed a lot of punk and metal fans out there. These were fans of bands like the Misfits, Iron Maiden, The Cramps, and Black Sabbath. There were onbviously a lot of horror film buffs (films like Texas Chainsaw Massacre, Nightmare on Elm Street, Evil Dead, Halloween, and Creepshow). A lot of the punks and metal guys tended to be hispanics in their late 20s - early 30s. There was also an older crowd of 45 - 55 males who were clearly more into it for the special effects make-up and technical side of it. They dressed fairly normally. These are probably the old-school guys who were getting into this stuff back in the 80s.

Overall, it wasn't a bad experience and as usual, saw some people I knew. The show seemed to be doing better than ever, wit the Fire Marshall having to stop any more attendees from entering the building at one point (I think some of these people had tickets, too!).