Here are some cool opportunities I've had throughout the years to leave my mark on the world - but especially in TV, movies, magazines & music. How many do you know about?

A year after moving to Los Angeles, a stylist contacted me wanting to rent a few post-apocalyptic clothing accessories for a photo shoot with the Killers for Q Magazine.

It was not only exciting to be renting out some of my collection, but also to have my items worn by The Killers. (I really liked their first album, Hot Fuss, but gradually lost interest after they changed their sound.)

The stylist dressed singer Brandon Flowers in my very accurate replica Mad Max shoulder pads, only she put them on backwards purposefully. 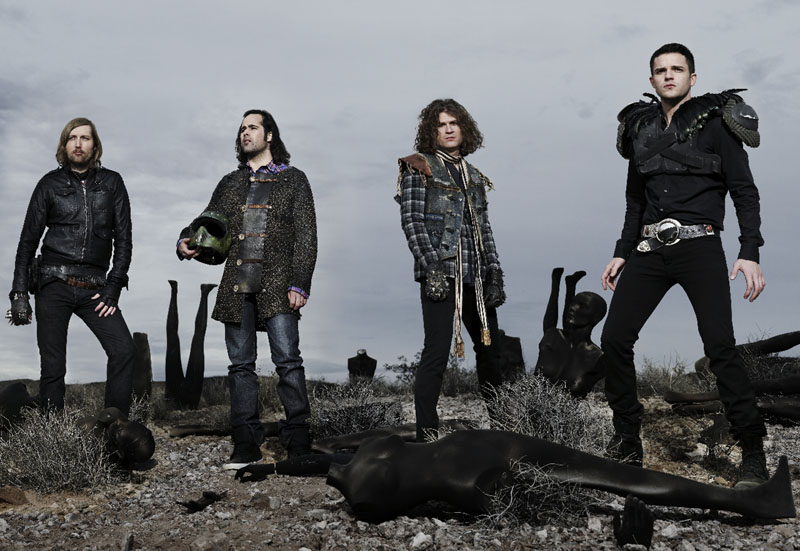 It turned out that the mannequins in the photo shoot were borrowed from my friend Tony Swatton, who is Hollywood's go-to blacksmith.

The shoulder pads had black rooster tail feathers on them & it just so happened that Brandon Flowers loved putting feathers on his shoulders at that time, so he fell in love with them.

After the shoot, I was encouraged to reach out to his agent & negotiate a sale of the shoulder pads to Brandon. I did, and Brandon ended up not only buying them, but also featuring them in the video for Spaceman. Here you can see them covered in red fabric.

Soon after the photo shoot, I got my first film industry gig working as an extra for a Middle-Eastern casting company. I stumbled onto the opportunity on Craigslist.

I played an Iraqi man & dressed myself for the role. The director, Jared Chandler, was so impressed that he announced to the wardrobe supervisor that he did a great job dressing me, which the supervisor responded with, "He showed up that way!" (That's me in the teal suit.) 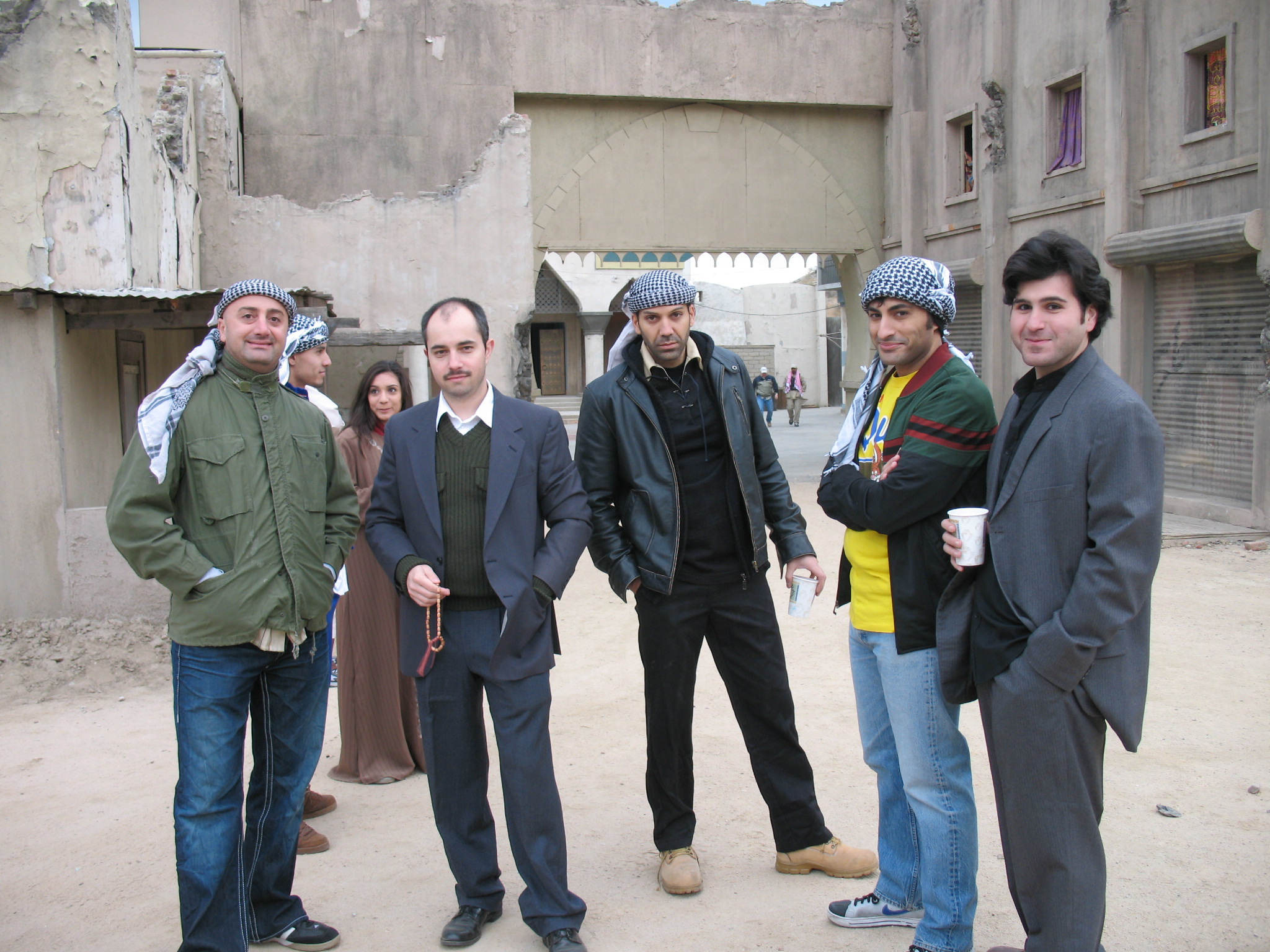 As a US Air Force veteran, I applied to work with the production company directly and soon found myself working on more projects as not only an extra, but also as a wardrobe assistant & set painter, painting murals & signs for the film sets. 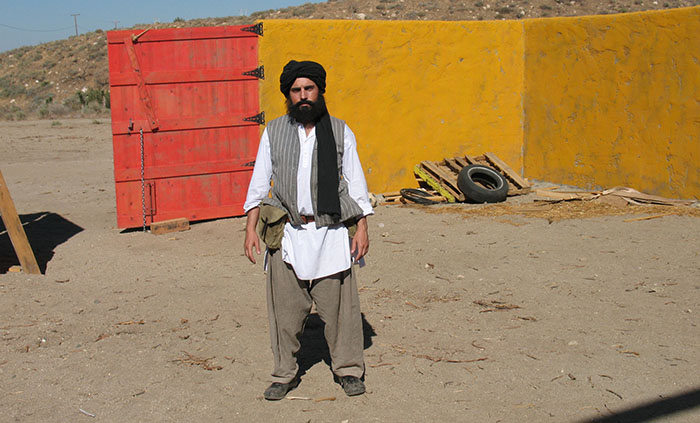 We shot a number of training videos to help US troops learn about the culture in Iraq, Afghanistan, as well as Somalia. It was a lot of fun, but unfortunately it was not very regular work. 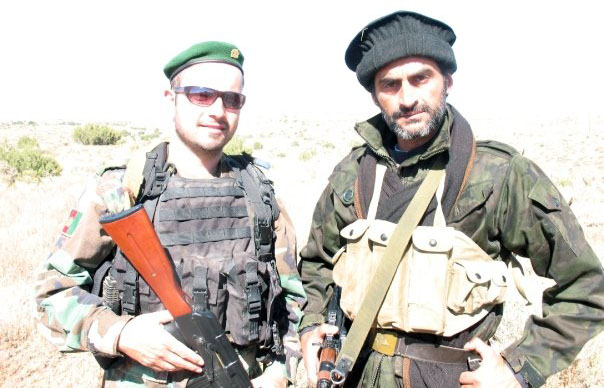 In between shoot dates for the training videos, I started working on organizing what would eventually become the world's largest post-apocalyptic festival, also known to many as the Mad Max Burning Man.

I had run & helped run a few smaller events since 2004. Having been a huge Mad Max fan since I was 15, this festival was truly a labor of love.

I ran the festival for 5 years and stepped down to start my clothing business in 2015. This was just before Mad Max: Fury Road rebooted the franchise.

The festival has gotten a lot of media coverage over the years and is truly world famous. I'm very proud of what I helped start and I continue to attend as a vendor.

In 2014, my friend Kai Norman from Yokai Props contacted me for help with a live action trailer for Wolfenstein: Liberation of London.

He needed several airsoft tactical vests reconstructed to look more like the concept art. I took them apart and got to work. 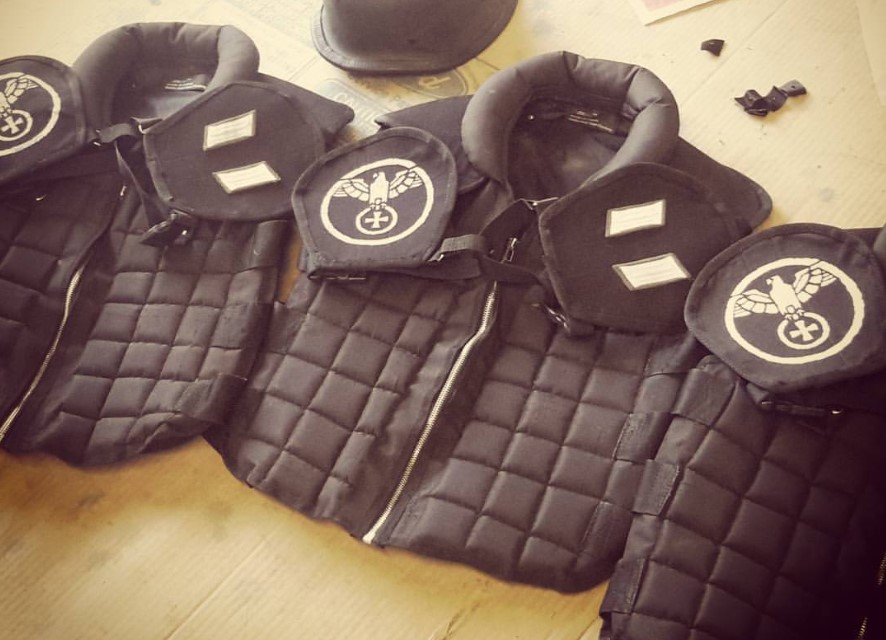 I got zippers & East German collar tabs in Los Angeles, and worked with a car upholstery shop to insert foam into them & sew them back together.

I created a stencil and hand painted an insignia on the shoulder pieces.

My friend Tod Waters of Junker Designs works often with Nina Proctor on movies directed by Robert Rodriguez. Tod spends most of his time at Troublemaker Studios in Austin, Texas ageing, dyeing & distressing costumes, as well as providing some of the wardrobe.

Tod's jackets got a lot of screen time in Alita: Battle Angel & he actually played a small role in it as well.

Hugo, Anita's love interest in the movie, played by Keaan Johnson, wears one of Junker Designs' iconic jackets throughout the film.

In one night scene, Hugo dons a different jacket as he is scavenging cyborg parts. On the back of this jacket, you can see 3 sets of clips that Tod got from me. These are the same clips I use on my Fraktur jacket & Atomic Slug backpacks.

Thanks to a mutual friend, I was able to help Greg Broussard, also known as the Egyptian Lover, with a shirt for his new video "The World Keeps Turning" featuring Newcleus.

You may remember his 1984 electro hit "Egypy, Egypt." I definitely do, thanks to my friend down the street who had a boombox & loved to break dance.

Check back soon! I'm already doing more that I can't tell you about yet!