Just as I was finishing up my showpiece black jacket for Monsterpalooza (the jacket became the prototype for the Fraktur Mark-II jacket), I found out about Blackest of the Black, and thought, "Wow. A concert festival with a line-up of industrial & metal bands. This jacket would be perfect for this event!" I sent an email to the vendor coordinator and sent in an application for their largest vendor space - a 10' x 20' spot for $999.

I wasn't sure what I was getting myself into, and communication with the staff was slim, but I decided to take the risk since I felt confident in my offerings. With 20 jackets and a ton of other clothing, apparel & accessories, I got into my rental van on May 26th and headed out for Oak Canyon Park.

Arriving at the park, I noticed there was a parking lot and fenced-off camping area outside of the main event area. The main event area, which we were given a pass to drive into, was a grassy area with trees where all the vendors, installations and huge twin stages were set up. The weather was quite pleasant and the oak trees by the lake seemed like a perfect venue for Danzig's horror-occult-influenced music festival (sponsored by Wienerschnitzel).

The guys from 3Teeth walked by as the final preparations were made to open the festival gates. Slowly, people shuffled in and started partaking in the festival. 3Teeth opened the line-up (anyone who knew who they were felt they should have had a better place in the schedule), and were followed by a number of metal bands, finally ending in a set by Suicidal Tendencies. 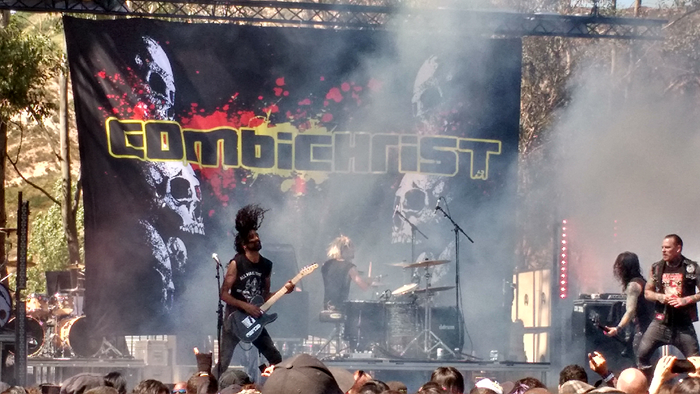 The turnout never quite exploded that evening, and as we found out eventually, Blackest of the Black did not seem to be very well attended at all that weekend. As someone who ran and attended Wasteland Weekend for 7 years at this point, I felt like Saturday's turnout was maybe 1000. Friday was fewer. Given some of the acts on stage, I felt it was highly likely that this festival was a financial loss.

As for causes of the low turnout, some speculated that holding the festival on Memorial Day weekend was not the best call. Also, it was held on Friday & Saturday, while the 3-day holiday weekend ended on a Monday. Most potential attendees may have simply decided to go out of town, or to attend that weekend's other event: Punk Rock Bowling in Las Vegas.

The highlights of the festival for me were running into other wastelanders at the festival, selling a mesh dress to Glenn Danzig's girlfriend, and watching Ministry's whole set.

In the end, the vending experiment resulted in a loss. With the high cost of the vendor space, van rental and a night at a hotel, I did not sell enough to even break even. I hope Blackest of the Black continues, and gets a lot bigger turnout in the future. In the meantime, I am going to keep my eyes on Knotfest since the turnout there seems to be significantly higher, and would probably still be a great audience to show my stuff to.