Demobaza is a clothing line created in 2005 by designers Demo & Tono, as a collaboration between the two Bulgarian designers. 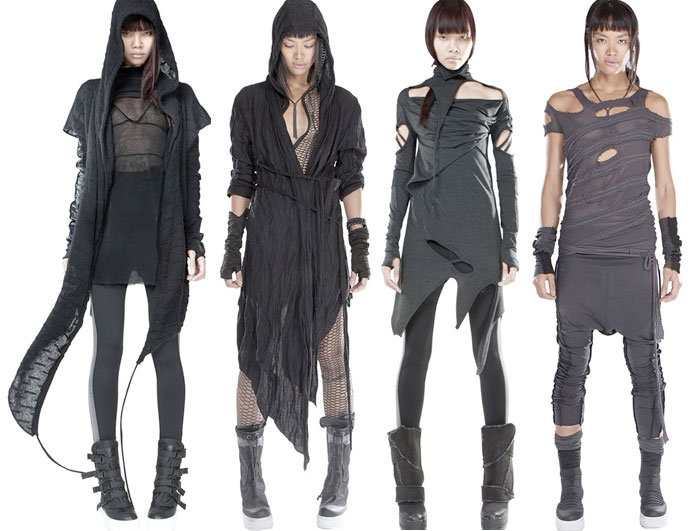 The overall look of the brand is described as high-end casual. There is a modern, athletic, form-fit look, combined with flowy & long layers, usually with an emphasis on subtle detailing. The result is a futuristic, almost dystopian desert nomad look.

The brand seems to be popular among attendees of Burning Man, and seems to fit into current notions of post-apocalyptic fashion due to the many hoods, cowls and asymmetry seen on the clothing. Many have categorized it as techwear, but it may be safer to say that Demobaza is only related, as the brand seems to be a bit more earthy than its pure cyberpunk cousins.

The fabrics seem to be primarily based on cotton jerseys, which are good basic textiles when you want a lot of give, without a synthetic or shiny appearance. (Jersey is commonly seen in the everyday t-shirt.)

What really adds character to many of Demobaza's styles are details like the multitude of seams (or folds) criss-crossing the garments, the elongated cords dangling in random places, and the mineral-washed fading.

Why is Demobaza so Popular?

I'm sure the primary reason for Demobaza's popularity has been their impressive photos. These photos invariably feature slender Asian models, arms dangling, pigeon-toed & with their heads drooped at a 30-degree angle. Their unique, science-fiction Bedouin look is regularly set against the backdrop of a clean studio, a concrete wall, or what looks like the Gobi Desert.

In 2017, Gary Numan can be seen sporting a whole Demobaza outfit in his video for "My Name is Ruin."

To complement their clothing, Demobaza also offers bags & footwear. Their shoes could probably be described as light, minimalistic boots with thick, flat soles. The looks are usually somewhere between ninja and moon boots.

Reviews on Demobaza's clothing seems to be mixed. Many seem to be happy, while others are not so satisfied. Complicating matters, there have been many Asian-based online retailers who have used their photos without permission to sell knock-off garments on places like Facebook & Pinterest.

The primary complaints seem to be inconsistent sizing, and quality not meeting expectations, especially considering that Demobaza's garments have a high-end price tag. Some have said the garments looked cheap.

Many have said that returning a garment is not convenient.

It may be best to locate a local retailer & try on the piece if you want to ensure a good fit.

Here's a thread a friend posted after purchasing a vest in 2019. 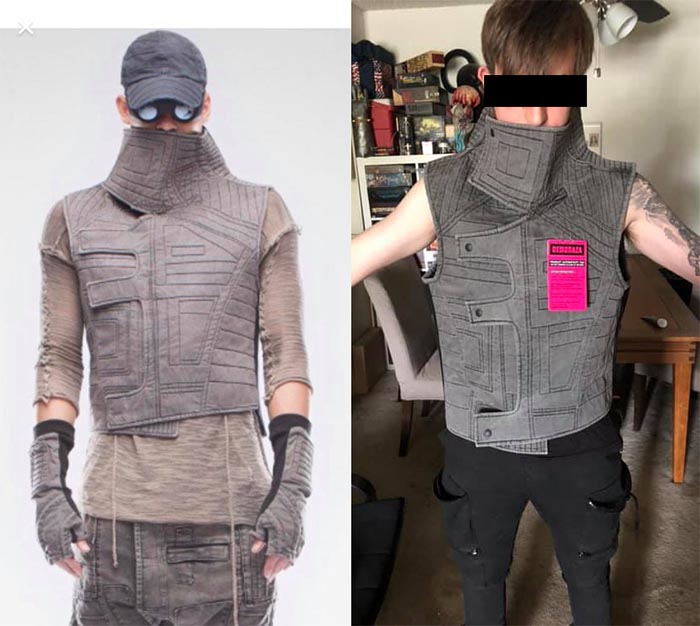 While you might be able to find some shady websites that sell knock-off garments, it's hard to tell whether or not you will ever receive anything at all after purchase.

Stand Out by Balaji