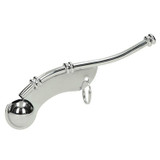 This odd-looking naval whistle is known as a boatswain (or bosun) pipe, call or whistle. In Mad Max beyond Thunderdome (1985), the main character, Max, uses it as a secret weapon to defeat Master Blaster in the Thunderdome.

What is a Boatswain?

A boatswain, or bosun, is an officer in charge of hull maintenance on a merchant ship. Also known as a petty officer, or a deck boss, the boatswain is in control of the deck crew, anchors, rigging and cables.

What is a Boatswain's Whistle?

The boatswain call is a whistle used to communicate commands on a ship, where voice commands would otherwise not be heard because of the volume of sea noise or inclement weather. There are over a dozen commands that can be called using the bosun pipe.

Mad Max beyond Thunderdome is a 1985 movie starring Mel Gibson and Tina Turner. In the post-apocalyptic Australian desert, Max (played by Gibson) gets his camel-driven wagon stolen by an airplane-flying bandit. Max's pet monkey manages to throw a number of items out of the back as it speeds off. Among those items are a pair of boots holding a boatswain's pipe.

Max wanders into the nearest town, Bartertown, to look for his wagon. There, he negotiates a deal with the town's boss, Aunty Entity (played by Turner) to get rid of Master Blaster, who is challenging her authority. Master Blaster is a duo made up of a little person riding on the back of a large, strongman.

Max picks a fight with Master Blaster, and soon he is battling Blaster to the death in the Thunderdome, a large metal cage. After several minutes of fighting, Max blows the whistle, causing debilitating pain to Blaster's sensitive ears.

Exactly as described, fast shipping... thanks

I plan on using this to fend of blaster should I ever be cornered in the thunderdome.

Shiny and chrome. Solid and functional.

Great quality and looks awesome! Sound is piercing and will definitely work on any Blaster you face in the Thunderdome.

Ordered this bosun and was not disappointed. Nicely packaged to avoid any damages in shipping. A must have for Mad Max fans. Very shiny and chrome!