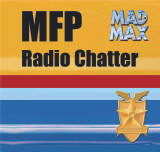 Originally priced at $100, this special audio project was offered as a CD made exclusively for Mad Max replica car owners.

This audio project allows you to simulate the chatter of a live Main Force Patrol police radio, right in their OWN vehicle or home.

Story lines and characters are recreated based on the film, as well as spun off into entirely new material. Nearly all of the audio is our own, new dialogue.

Story lines and characters are recreated based on the film, as well as spun off into entirely new material. Nearly all of the audio is our own, new dialogue. One famous sequence (the Night Rider chase) is recreated from the movie (the sequence was re-recorded by our actors in order to produce clean audio with no background music etc).

Technical note: There are gaps of silence in this recording varying up to 15 seconds in length. This is to simulate the feel of listening to a real police scanner. Sometimes there's a whole lot of commotion going on, and sometimes there's a lull in the action.

This project was professionally produced in Los Angeles using a cast of Australian voice actors and was written and produced by hard core Mad Max fans. You won't be disappointed.

James Re as Roop, Pine Tree, Corporate Slave, and Starman

Jared Butler as Max, Nightrider, Charlie, The Dark One, and Row B

The download link will be sent to you in an email, along with the invoice, after your purchase. It appears that sometimes, it may take up to 12 hours to receive your download link.

Will you be releasing this again on CD?

Unfortunately, it's unlikely. The CD is an outdated format with very little demand.

In addition to the reviews, check out these testimonials from some of our first customers:

"OMG.....I absolutely love it. You guys did a supreme bang up job on the entire production. All you guys deserve a serious ovation for that incredibly awesome piece of movie memorabilia. I even liked how the lady that plays the MFP dispatcher sounded just like the dispatcher from the actual movie. Bravo, a job well done. Thanks again so much. Well worth the money!"
- Jim

"SWEET! The infamous 'ice cream truck caper' had me rolling! If you don't have one, I strongly encourage you to order it. Thanks for all the effort that went into it."
-Whit

"I played the CD this past weekend at a local car show and loved it!!! Even though I was responsible for the deaths of a bunch of schoolkids on the CD, the kids voted for my car and I got kid's choice award - BETTER THAN THE JUDGES AWARDS!!!! AND A BIGGER TROPHY!! What a great job on CD thanks to all who made it happen!!!!"
-Tony

"You guys did a great job on the CD!!! I would highly recommend the CD to all members! It is a very professional and unique item you will never find anywhere else! I can't wait to get it to play on my overhead radio in my BoB."
-Chris

"I just got my MFP Radio Chatter CD today. Man how awesome is this!!! The sections transcribed from the film give you the definite feel of listening in to the same action via the police scanner! That is good, but the ORIGINAL MATERIAL! Man that is great also, touching on so many cool iconic 'Max' connections into the future films, and good continuity all the way to the crackling Radiation! VERY COOL GUYS!!!! Creative, well acted and produced, and sounds good coming through the tiny speakers of the RVS! Thank You!"
-Dee

"GOT MY CHATTER CD TODAY!!! Woohoo! Neat stuff. Smiled all the way back up my driveway. Neighbors must have thought I had something dirty. Anyway, LOVE IT! Thanks for all the hard work guys! The cover looks awesome too! Very professional. Great work team, and once again THANKS!!!!"
-Ron

Absolutely brilliant. I’m currently building a goose replica Kawasaki. I will be fitting a period CB radio which will also be hooked up to an MP3 player to broadcast radio chatter. Well done to the voice actors who created this masterpiece and thank you very much Karol B Cheers William

Exactly as it should be. Perfect. Only one to get.

Excellent audio - well made - sounds just like the chatter you hear in MM1 Great for when the MFP Goose bike is parked at a static display or even just parked waiting for rides to start, as it helps people identify what they are looking at faster.

This will be a great addition to my playlists for broadcast at east coast festivals.

Nice job guys. It's the duck's guts. I have a yellow Interceptor that goes in shows. I leave the radio chatter going in the car to create atmosphere etc. Attention to detail. Well done ...

This download of re-enacted MFP chatter is top shelf. Karol and company did a great job on this. If you’re building a replica Pursuit, Interceptor, or a type of Pursuit Special, you’re going to want this playing through your speakers whilst at car shows, or patrolling your local roads.